It was the Year of Remarkable Women...Not only have there been important women now and throughout history but this community would not exist without the people who did a whole lot more than keep the home fires burning. -- Rick Romancito*

Tears flowed as I read these and other leading paragraphs by Rick Romancito, Editor of Tempo, the arts and entertainment magazine of The Taos News. His commentary nailed the intent behind the Town of Taos' creative community traveler education theme, the Remarkable Women of Taos: to honor women from all walks of life across centuries and cultures. As he observed in his cover article "2012: The Year in Pictures,"* an initial list of women in the arts, business, health and outdoors grew to include "All women here. Every woman who worked hard to keep their kids in school, who made sure there was food on the table and who kept businesses, organizations and committees together became worthy of recognition." 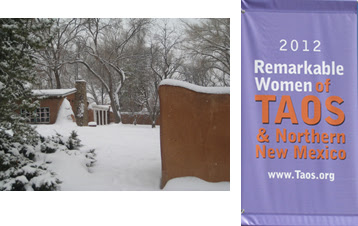 Just today, the day this year-long celebration draws to a close, Janet Webb and I--the last two women still standing around the Town of Taos' Remarkable Women of Taos--finalized the final profiles for what will become an e-book. At the beginning of December we looked at the 230 some profiles on women on the Remarkable Women website and at the year's list of exhibitions, events and honorings. We considered the variety and breadth of women and men in the community who poured hours of research, writing, event and exhibition organization time into the project. Janet and I agreed that such an effort deserved to be captured for all time. As our archeologist friend Michael Burney put it "What a marvelous piece of anthropology. Imagine someone reading this100 years from now."

As I prepared to write this, my final blog piece of 2012, I tried counting up the number of women recognized in our community this year. Various authors wrote profiles on over 150 women. Adding in the women honored by The Taos News, Holy Cross Hospital and other entities, and through various events and exhibitions, the final count has to be at least 450. It's a rough count. That may seem like a lot of remarkable women, but believe me, it's only the tip of the iceberg. And to think it all started with this blog "Mabel Dodge Luhan and the Remarkable Women of Taos." But that's another story--one I will tell you next year, next month.

With the "longest single curatorial project of Taos" behind me, and with another lovely snow, my thoughts turned inward. The last Remarkable Women of Taos project that Mabel Dodge Luhan House staffers proposed was a New Year's Eve reading of Mabel's book Edge of Taos Desert. Ali McGraw gave a dramatic reading from the book at the Harwood Museum of Taos last year. (It's a book she likes giving to friends.) Although the New Year's Eve event didn't happen, the thought of it brought me back to my favorite book of Mabel's, Winter in Taos. I thought it would be fun to illustrate some lines she wrote about winter, a perfect way to wrap up 2012.

The following lines are from Winter in Taos. Photographer and staffer Noreen Perrin** provided fresh photos of the Mabel Dodge Luhan House in today's snowstorm...I took the rest. 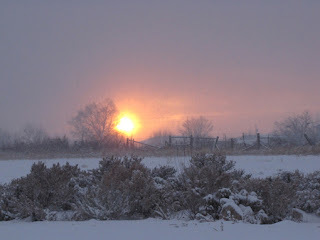 The air, in the cold morning light, is full of a softer flood than flakes of snow… 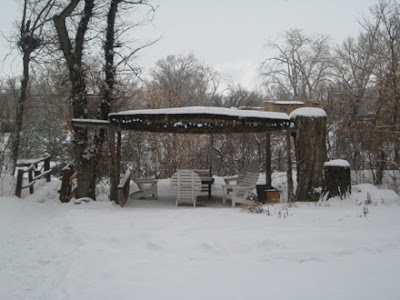 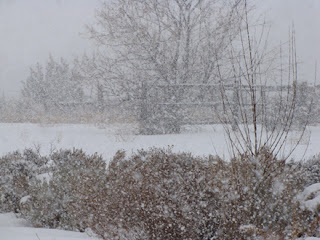 Now the air is full of white flakes, blowing easily sideways, not cold... 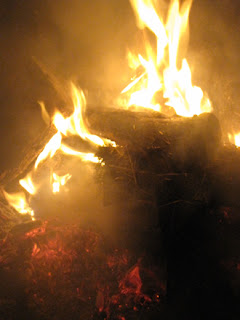 Close all the doors and live by the fire, and enjoy... 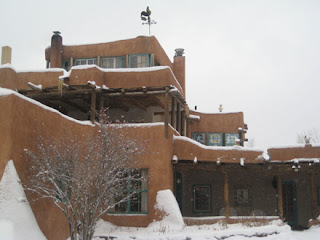 Give up to winter and the sights and the sounds of the seasons...


Together with Mabel and the owners and staff of the Mabel Dodge Luhan House, I wish you all a HAPPY NEW YEAR!

** My gratitude to Noreen Perrin for the photos of the Mabel Dodge Luhan Hous log cabin and exteriour wall (photo #1), the ramada (photo #3) and facing the entrance (photo #6). All ©2012 Noreen Perrin.