The inaugural blog posting (August 6, 2010) centered on the discovery of the New Mexico Historical Highway Marker on “The Three Fates” which included Mabel Dodge Luhan, Frieda Lawrence and Dorothy Brett. Since then I’ve written several postings on Mabel and introduced Frieda. Now it’s Brett’s turn. She’s helping me make the introduction, including how she came to be in Taos. 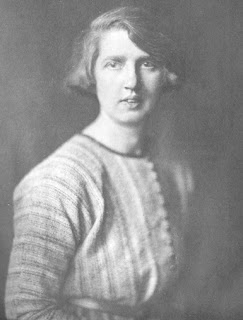 I was born in London, in what now seems to be the golden age of Queen Victoria. Mine was the usual life of a child born of parents involved in politics, royalty, and the necessary conventions.

Born in London to an aristocratic family, Dorothy Brett was raised in the restrictive manner typical of privileged children of the Victorian era. She lived a relatively secluded life, until with the help of an old family friend, Dorothy got permission from her parents to attend the Slade School of Art. She began her studies in the fall of 1910, and completed the program four years later. According to school tradition, students called each other by their surnames. From that time on, only her family referred to her as Dorothy or Doll; she was called Brett or “The Brett” by everyone else.
By her second year, Brett had a studio of her own where she sometime entertained fellow art students, including Dora Carrington. Free of her oppressive home life, Brett adopted the Bohemian life of an artist. She and Carrington bobbed their hair and wore men’s trousers. Soon, through the salon of Lady Ottoline Morrell, who like Mabel Dodge hosted some of the leading intellectual figures of her time, Brett and Carrington met George Bernard Shaw, Aldous Huxley, Virginia Wolfe and Katherine Mansfield at Lady Morrell’s Garsington estate. Through these gatherings, Brett gained exposure to a stimulating social world and to the arts through some of England’s leading visual and performing artists and writers. (Katherine Mansfield would become one of Brett’s closest friends.)

We were after new ideas and concepts that often frightened others. I’ve always said everyone has to be after something, and if others don’t like it, the devil take them.

Through the Garsington circle Brett met D. H. and Frieda Lawrence in 1915. In the years that followed, Brett became familiar with Lawrence’s proposal to create a utopian community he called Rananim. When the Lawrences returned to England following their first visit with Mabel Dodge Luhan in 1923, D. H. stated that he had found the ideal location for his Rananim – Taos, New Mexico – and actively recruited Katherine Mansfield, John Middleton Murry and others from the Garsington crowd to join him and Frieda there. In the end, only Brett joined the Lawrences on their return trip to Taos in 1924.
Upon her arrival, Brett instantly fell in love with the land and people of New Mexico. She later wrote about the “sudden dive into an entirely new life among three races,” and the transformation that took place in her life. “I began to find myself, my place and later a purpose.”

An account of Brett’s Taos years will follow, and will address questions like “How did being in Taos affect and change her life direction?” To help answer that, I’ve recently reconnected with Brett’s biographer, Pamela Evans. I asked Pam for her thoughts on what people might not know about Brett. One answer -- what an avid reader she was. Also that Brett mentored young people: “She loved the energy and curiosity of the young, and was always encouraging them to buck the system, question authority, find work they loved and then not be talked out of doing it.”

We’ll hear more on Brett from Pam, who has graciously agreed to write a guest column. I can hardly wait!
Adios for now,
Liz